One mistake often made about street style is that it generally fails to represent a variety of bodies - especially our plus size ladies! A scroll through the selection of editors and influencers shot walking the streets during most fashion weeks does little to showcase the myriad of shapes and sizes well-dressed men and women come in, and in an age when representation serves as a battle cry, many have begun to notice the discrepancy. After being called out by publications like New York magazine, Fashionista, and The New York Times in the past year, street-style photographers have attempted to explain the reasoning behind the lack of imagery available, but little has actually changed in terms of what you see being posted.

Instead of waiting around for fashion to get its act together, plus size fashion influencers have been forging their own path, creating the kind of imagery they didn’t see growing up, promoting body positivity through YouTube channels, and starting blogs of their own. Armed with digital cameras, ingenuity, and an unwillingness to accept the status quo, they’ve brought a new verve to the concept of street style. Here, four young women who are changing the game online share their thoughts on dressing—and why it’s time for the fashion industry to wake up. 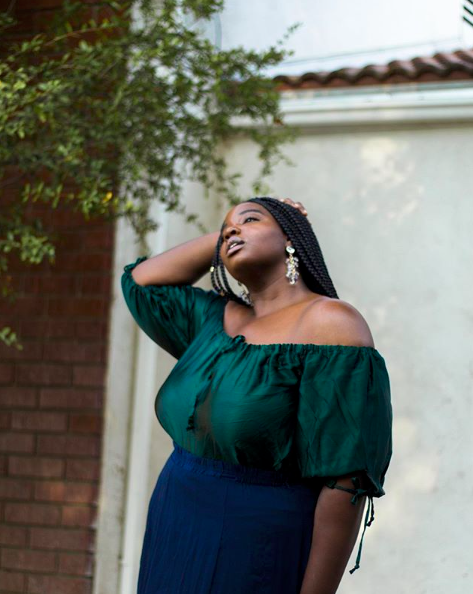 When Valerie Eguavoen started her popular blog On a Curve in 2014, she didn’t share the news with her friends. As a law student at Howard University, she wanted to keep her burgeoning online career separate from her studies. “I just did it on the side, and then in my last semester everyone sort of found out,” said Eguavoen on the phone from Raleigh-Durham, North Carolina, where she now works as a civil rights advocate. “After that, it really took on a life of its own.”

Though she was discreet about her social media presence, there’s no hiding Eguavoen’s innate sense of style. A master of mixed prints and unexpected color combinations, she offers fans a carefree interpretation of the latest trends. A self-professed “maximalist,” she views her eclectic wardrobe as a means of living unapologetically after spending her teens wearing dark colors and hiding her body. “For so long, I would wear black in the summertime when it was hot as hell. I didn’t want to draw attention to myself,” says Eguavoen, who credits the online plus-size community with giving her the confidence to experiment. “It was through the process of blogging and finding a group of people who are amazing, dress beautifully, and inspire me—representation does so much.”

Eguavoen is apt to mix a striped top with a splashy polka dot sweater or wear head-to-toe leopard print, but her pieces take effort to source. An avid online shopper, she’s interested in seeing brands go further in terms of what they’re offering to the plus-size market. “We’re seeing this progress on paper, but not in the actual heart of the industry,” she explains. “Compared to four or five years ago, there are more options, but you still can’t just walk into a store and find what you want. It takes a lot of parsing through different websites and social media. On a base level, it’s unfair that two women of different sizes can’t go to the same store and find what they’re looking for.”

Though the fashion industry may be slow to catch on, Eguavoen has found her own way to instigate change, taking her message one step further with the launch of You Belong Now, an online platform dedicated to featuring creators who have been overlooked due to their ethnicity, gender, class, or size. A typical post might showcase the personal style of cancer survivor turned model Mama Cax or share images of emerging photographers like iPhone artist Derrick Boateng. By moving beyond the confines of traditional blogging, Eguavoen hopes to hammer home the point that fashion is for everyone. 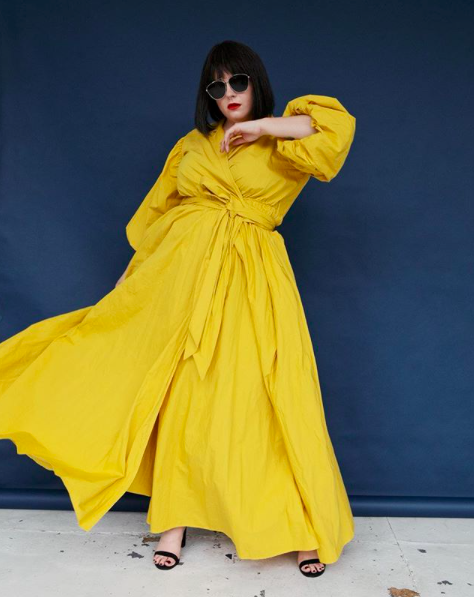 Lydia Hudgens is used to making other people look flawless. One of the few photographers to shoot street style that includes a range of body types, she’s put forth a size-inclusive vision of what it means to be well dressed. On her Instagram and within her shoots for plus-size labels like Premme and Universal Standard, Hudgens focuses on vibrant style, but she didn’t consider sharing her personal wardrobe with the world until prompted by friends. “They would always say, ‘Oh, you should share what you’re wearing on Instagram,’ but it didn’t occur to me initially because I was so focused on other people,” shared Hudgens from her Brooklyn studio. “I think that’s common for photographers, but people are interested in seeing the person behind the lens.”

Hudgens’s look has evolved over time. With her salt-and-pepper hair and buzz cut, she stands out—especially when wearing a monochromatic red fur or neon striped gown—but her colorful look is a recent development. As a teen in the ’90s, when the only options were specialty stores like Lane Bryant, she adopted a “photographer’s uniform” of denim and leather jackets. But she began to expand her horizons after she hit 30. “I’ve gotten more playful. As I’ve gotten older, I’m not giving a fuck anymore about what other people think,” she says of the change. “There are so many options, and I just decided to just start trying things on. I have people tell me all the time that they could never pull off this or that, but you’ll never know until you try it.”

Hudgens hopes to see clothing for larger sizes move beyond fast fashion and toward garments that are better crafted and sustainable. “I love a trend piece, but it’s important to [also] have something that can last and grow with you as you get older,” she explains, noting the reluctance of some consumers to invest in their wardrobes for fear of weight fluctuations. ”There has been a lot of pressure placed on plus companies to have low prices. There are a few brands that do have higher quality and [subsequently] a higher price point, but I’d like to see more because a lot of what is out there now isn’t well made.”

For Hudgens, it's the lack of larger sizes offered at a contemporary or luxury price point that contributes to the monotony of street style. “There are a few girls who are incredibly high fashion and are pushing things forward but aren’t going to these shows because they don’t feel included in them,” she says. “How can they feel included if the brands don’t carry their sizes?” 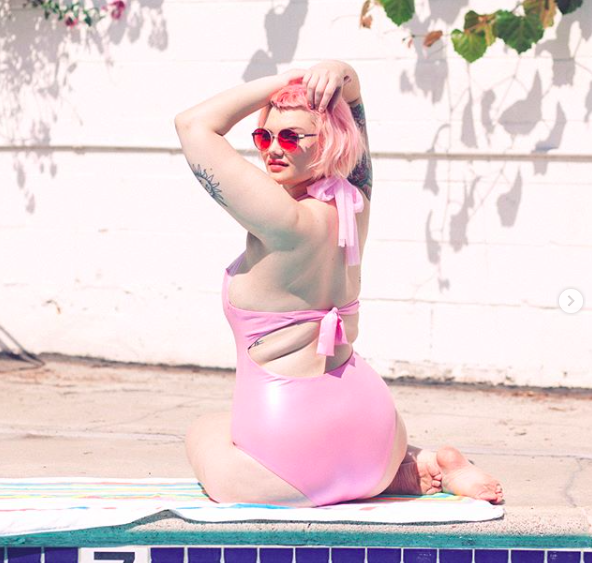 Isabel Hendrix’s style is anything but off the rack. The Los Angeles-based model fills her feed with perfectly styled selfies that feature the very best in vintage sourced from her travels and L.A.’s array of flea markets, thrift shops, and resale outposts. Each update has its own flavor, and for this chameleon, that’s exactly the point. “I used to think that if you were someone who was into fashion, you’d have one style and that would be your thing, but I really have broadened that idea,” she says. “[My look] changes day to day, but I’ve always loved vintage stuff from the ’80s and ’90s.”

The influence of Gen X is evident within Hendrix’s closet. From baby doll dresses to Cher Horowitz–worthy plaid sets and gingham bikinis, her outfits are a cross-section of cool-girl favorites, which she amps up with her colorful beauty choices—pastel hair, fake freckles, and plenty of statement eyeshadow. “It goes with my mood and whatever I’m feeling,” she says. “I like a bit of a throwback, but it changes from day to day.”

Hendrix advocates looking regularly to get the best vintage. “I don’t think I’ve bought clothing from a physical store other than a thrift shop in years,” she admits. “When you go all the time, you’re more likely to find those special pieces that are your size and exactly what you want.”

The constant within Hendrix’s postings is her message of self-love. After overcoming an eating disorder and becoming engaged in the body-positive community online, she’s adamant about the importance of self-acceptance in fashion spaces. “In trying to figure out how to be healthy and happy, one of the big things was listening to what you need mentally and physically,” says Hendrix. “It encompasses a lot more than just thinking about yourself; it’s really about caring about the whole world.” 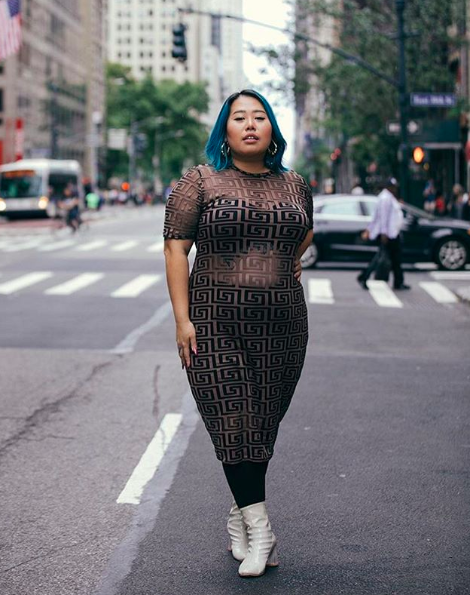 Everyone transforms for Halloween, but for artist Kaguya, the change lasted well past November 1. After a bad breakup several years ago, she decided to celebrate the holiday by picking up a Red Riding Hood costume and posting a few selfies, which quickly went viral—launching an unexpected career as a plus-size model, cosplayer, and body-positive activist. “[Before] I was wearing very conservative outfits,” she explains. “I gained 40 pounds, and I was being body-shamed and slut-shamed by my ex constantly. During those years, I was not on social media at all. I didn’t like my appearance, and I was not happy with the way that I was.”

Quickly discovering that she could not only model but also use the platform it provided her for good, she began her eponymous blog, P.S. Kaguya, in 2016. Starting with diary updates and fashion posts, she garnered a following of like-minded people in search of inspiration and started to reconsider her view of her own body in the process. “I decided it was time for me to finally rediscover myself and change the attitude I had about myself,” said Kaguya. “It took me some time. For 26 years I had been worrying too much about what other people were thinking of me, so I wanted to get rid of that anxious mind-set.” Now she has no problem sharing sexier images or utilizing lingerie as outerwear. A self described "sex positive femme" she wants to show that sensuality isn't tied to size. "Growing up in a conservative Asian family you are not really exposed to sexuality at all," said Kaguya. "Bigger women or just overweight folks, in general, feel like they don’t deserve or they can’t find any types of love because of their physicality. [Which is] most obviously not true! Feeling sexy and expressions of sexuality can be empowering to anyone who does not feel as desirable."

While she acknowledges the challenges she faces within a business that tends to underrepresent Asians and Asian-Americans, Kaguya is ready to be the face of change. Part of what inspired her to model was the absence of anybody who looked like her: “I noticed that each time there was an ‘inclusive diversity’ photo shoot, there were no Asians represented whatsoever,” said Kaguya. After experiencing rejection from agencies due to her height and tattoos, she decided to represent herself, a move that led to her current success.

It’s that industrious spirit that she admires in the new generation of designers. “I’ve seen a lot of younger artists making clothes for plus-size girls and doing it hands-on. It’s going into a direction where it’s more fashionable,” she says. “The industry is slowly but surely getting into a better space where [great clothes] are going to be more attainable. I think it’s finally moving in the right direction.”